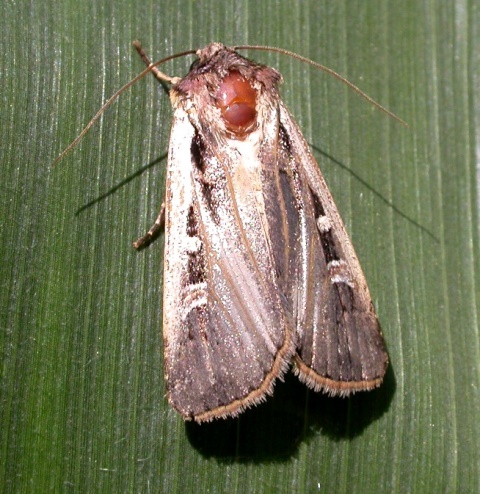 Larvae from western bean cutworms (WBC) can cause kernel damage in corn. Insecticide application timing is sensitive due to the larvae’s movement inside the ears of corn, thus only being exposed to the insecticide between oviposition and entry into the corn. The aim of this analysis is to use multivariate approaches to characterize the WBC flight pattern and historical changes from 1981-2017. Researchers trapped moths at Concord, Clay Center, North Platte, and Aurora. Previous analysis grouped the data into 5-year periods and modeled univariate ANOVA to compare total number of moths captured, flight lengths, days from first capture to peak flight, and days from peak flight to last capture. In order to quantify the entire flight pattern, used latent growth modeling to explain the flight start date (intercept) and length of flight (slope) as a latent variables based on the observed summary statistics such as day of the year flight began (DOTYfirst), day of the year 25% of the flight was finished (DOTY25pct), day of the year 50% of the flight was finished (DOTY50pct), day of the year 75% of the flight was finished (DOTY75pct), and day of the year flight ended (DOTYlast). Covariates used to predict the start date and length include weather based on average temperature and total precipitation as well as moth abundance based on total moths and peak moths. A time series plot with a loess curve provides a visual of the changes in flight start and length across the entire time frame. Characterizing the changes in the flight distribution allows growers to determine the best insecticide application time.